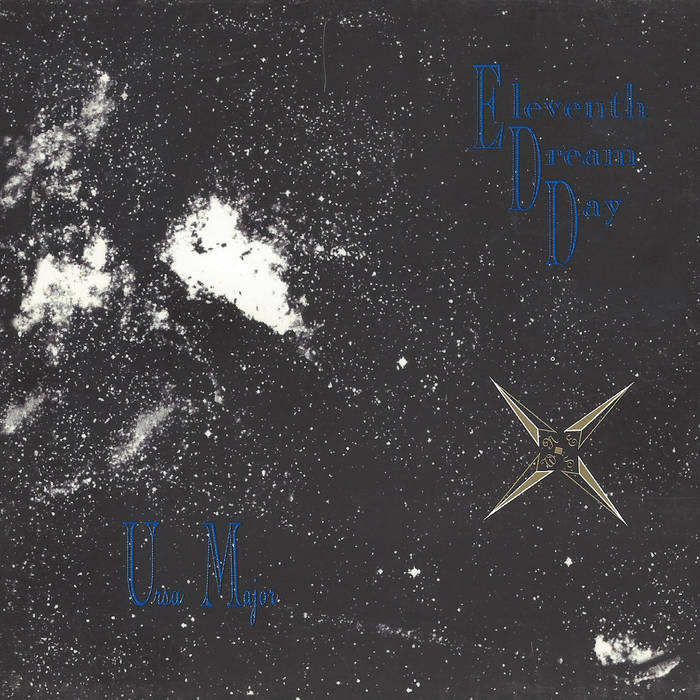 When asked about personal favorites, the 1994 album Ursa Major often gets name-checked by Eleventh Dream Day, but it has been largely unavailable the last fifteen years. Now it’s on Bandcamp for your downloading pleasure with two live bonus tracks!

Originally released on Atavistic after three records in four years with Atlantic, Ursa Major is a departure from the grungier early days of the band and urgent guitar-driven pop of El Moodio. Free from their Atlantic contract and with no plans to return to the major label world or big tours, Eleventh Dream Day made a record that would see the expanding musical interests of individual members come together to create new sounds. With the band's 2021 Comedy Minus One release Since Grazed, you might look back at Ursa Major as a foreshadowing of what would one day come.

At the end of the final road trip promoting El Moodio in 1993, there were a lot of reasons to pull back from the incessant touring and promotion that defined the Atlantic years. For one, EDD hadn’t achieved the commercial success necessary to justify toting a toddler around the world in vans and Dutch bicycle seats. Nobody wanted to end the band - they felt they had made a great string of records, and continued to draw good crowds and critical support. It was still fun. With touring over indefinitely, Rick Rizzo went back to school to get his teaching certification, Janet Bean sunk her energy into the next Freakwater record, and Doug McCombs was getting Tortoise off the ground. By mid-1994 though, a new batch of songs emerged and the band began to record at Idful with Brad Wood.

Atavistic, which had been behind the Making Like a Rug video, was very interested in working with them again. Wink O'Bannon came up from Louisville and Eleventh Dream Day began to create the record in the studio. This was unlike any previous record because there really wasn’t much rehearsal or workshopping of songs - this was a studio record, and EDD built the songs as they went along - leading to the experimental elements that separate it from previous albums.

Ursa Major begins with History of Brokeback, a McCombs-generated instrumental with changing time signatures that would signal to any listener that Eleventh Dream Day was not looking to join in the Wicker Park frenzy swirling around Liz Phair and Urge Overkill. The mood shifts back and forth from ominous to upbeat. While it may be one of the more complex songs in the group’s oeuvre, it is hooky in its own way and the title was a precursor to one of Doug’s future bands.

Occupation, or Not opens with acoustic guitar and brushed snare, another departure from the usual full-on assault of electric guitars charging out of the gates. “This is my castle, this is my home. Revolution always looms" are first words of the album, perhaps summarizing the fact that things were changing. “A shakeup was surely due.” The guitar solo is not a solo. A slide scraped across distorted strings. No bombastic ending.

Flutter is a mother’s musical love letter to her son. “You are the most beautiful angel I have ever seen.” Once again, this was a softer kind of pop song, with rhythmic complexity and strings. Atavistic also shot a video for this at Logan Auditorium (yes, that’s John McEntire on drums!).

Orange Moon closes out side one with a more typical EDD sound, although this is one of the first songs with a nonstandard tuning. Three chords soft louder loud soft loudest. The lyrics might sum up Rick’s prevailing mood at the time. As he started working toward a new career in teaching, he wasn’t far removed from the life of a touring rock musician, with the attention and perks that went along with that. At the same time, Wicker Park, where everyone lived, was blowing up as the hottest scene in the world. “The sky is for sale by the chunk.” Rick says he didn’t have regrets about dropping out, but at the same time felt betrayed by how Atlantic worked El Moodio. “But the moon that I held has been foreclosed it’s not for sale.”

"I felt conspicuously absent from the hoopla and somewhat hurt. I’m not sure how the others in the band felt, but they were in the process of creating new genres of music," Rizzo shared. "I seriously had no desire to be back in it - the major label thing was a game that got old.”

"No wish to wish upon that star it seemed too empty it seemed too far." So really, it’s about wanting something, but knowing that you don’t want it ultimately. “The moon is fake it floats in space blank witness night it’s made me crazed.” The final refrain “They won’t let it go” has a couple of possibilities - it calls out the labels as overlords - the band works for them, and in the long run all the people surrounding the band make their money. The bands are product with a limited shelf life and can be easily replaced by the next big thing. “I was more than hurt on this song, I was pissed," Rizzo added. "But I totally let it go after that song.”

Taking Leave was written and recorded after Ursa Major was done. Wink had gone back to Louisville. Hey - you write a new song and it’s your new favorite. “Tomorrow looms oddly again” - another lyric that shows an awkward, transitional state of being. “I’ve shown that I can take a punch. It has me worried."

Notable is the way Janet and Rick weave vocals in and out, Doug on a six string bass. “We recorded this after Brad left for the day,” notes Rizzo. “McEntire and Casey Rice ended up being creative forces in the studio!”

Bearish on High was originally called Orange Moon. It has the line, “orange moon I pine for you.” The typeset instructions got screwed up and instead of wasting album sleeves, the band decided to switch titles. No big deal, the themes are pretty similar. “I believe there is a feeling of defeat. I resolve to erase that thought.”

“I was definitely grappling with the career change," says Rizzo. "You can watch the sun set in the west and wonder when it ever left. “But I was happy, going to school, working at the Rainbo, and playing lots of tennis. I can't remember what I found so ironic at the time, but I was confident enough about life that it had me shouting it gives me faith!”

Nova Zembla, title provided by Nabokov, was perhaps the only between-song noodling that ever made it to an EDD album. Wink provides the clean guitar acrobatics as well as the storm clouds that roll in.

Blindside comes out of the chaos - a slow build up of dark clouds leading to the storm. “He knew he should go inside. He knew what was coming down.” The only solo on the record, but not really a solo. “Maybe an allusion to the gang violence that surrounded us in our neighborhood," adds Rizzo. "Maybe more hedging against emotional investment. Maybe both.”

The record closes with Exit Right, pretty apt direction for getting off the big stage. “On your knees you never beg, you just get used to being closer to the ground.” A humbled exit, but pride intact.

A right different record by what precedes it.

And the start of a band with very different work habits.

Ursa Major came out to much interest, and there was a plan for shows to follow. City Slang put the record out in Europe. Ultimately, larger plans and a tour with Sea and Cake and Tortoise in Europe, was scrapped when a miraculous diagnosis and treatment for their son’s epilepsy required domestic attention.

Since first hitting the road in a battered Econoline van in the 1980s, Eleventh Dream Day continues to build on their history by moving forward musically, while never forgetting what inspired them. On "Since Grazed" Rick Rizzo, Janet Bean (Freakwater), Doug McCombs (Tortoise, Brokeback, Pullman), and Mark Greenberg (The Coctails) are joined again by Jim Elkington (Tweedy, Steve Gunn). ... more

Bandcamp Daily  your guide to the world of Bandcamp

Featured sounds from Fly Lo and Ahmed Idris, plus Mother Nature hops on to drop off new project